Many people are at least vaguely familiar with Dilophosaurus thanks to its bit-part in the first Jurassic Park movie. It was that small-ish, cooing theropod with a pair of crests on its blunt head and that turned out to have a shocking extendible neck-frill and the ability to spit venom like a cobra. A classic scene no doubt, but as is usually the case with movie versions of dinosaurs, the real life animals were actually pretty different. So let’s talk about the real Dilophosaurus.

This dinosaur was first discovered in early Jurassic rocks from Arizona, and described by paleontologist Samuel Welles in 1954 (Welles, 1954). Due to the fragmentary nature of the first specimen’s skull, Welles initially thought the animal was an American species of Megalosaurus, and so named in Megalosaurus wetherilli. Welles later found better skeletal material, including a skull with those distinctive thin, upright crests. Realizing this was a different kind of dinosaur from Megalosaurus, he re-christened it Dilophosaurus (‘double-crested reptile’) in 1970 after its unique cranial features (Welles, 1970).

So what was the actual animal like? For starters, there’s never been any evidence of that extendible neck frill that the movie Dilophosaurus unfolded for (presumably) intimidation purposes. This was a Hollywood fabrication probably inspired by the not-so-dangerous frilled lizard of Australia which does possess such a trait that it uses to ward off predators. The ability of film Dilophosaurus to spit venom is also a movie construct. While a small handful of dinosaurs, such as the birdlike dromaeosaur Sinornithosaurus, have been theorized by some authors to have a venomous bite (Gong et al., 2009), there’s not much support for this among most paleontologists, and it seems pretty unlikely that any dinosaur species discovered so far was venomous at all (Gianechini et al., 2010). Several species of cobra are renowned for being able to “spit” their venom, but this is done through specialized fangs which the venom is actually shot out of towards the attacker. Since dinosaurs lack teeth with any indication of being able to channel venom, or any hint of venom glands, we can likely rule this out. Still though, it makes for a pretty darn memorable movie scene.

What science has revealed about the biology of Dilophosaurus might not be quite so dramatic, but we still have many neat insights into this dinosaur’s life, and it continues to provide mysteries for paleontologists to solve. Contrary to its movie depiction which had a fairly blunt, round snout, the real Dilophosaurus had an elongated, low, narrow skull. The teeth were long and curved, especially in the top jaws, and seem to have even reached the bottom of the lower jaws when the mouth was closed. Dilophosaurus had strange ‘notch’ between the premaxilla bones at the tip of the upper jaws and the maxilla bone that bore most of the upper teeth, giving it hook-nosed snaggle-toothed appearance (Welles, 1984). This trait is also seen in other theropods like the primitive coelophysids and the spinosaurs, but Dilophosaurus and its relatives took it to exaggerated levels. Paleontologists have argued that, due to this gap in the upper jaws (called a diastema by the pros), Dilophosaurus likely had a relatively weak bite. The jaws seem to have been strongest at the front, adapted for snatching and holding smallish prey (it may have even specialized in fish, which were common in its habitat) with the middle teeth delivering slicing and cutting bites (Therrien et al., 2005). 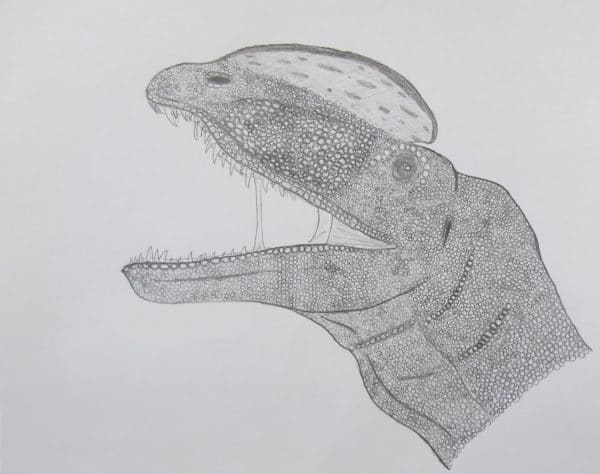 A detailed view of the head of Dilophosaurus. Less a blunt venom-spitting device, more a snaggle-toothed snatcher of small prey. By Nicholas Carter

Dilophosaurus was also much larger than its film depiction too- the largest specimens show an animal around 6 feet tall and 20 feet long, weighing about 900 pounds (roughly the size of an adult brown bear). This makes it one of the largest carnivores of the early Jurassic, a time that’s still not terribly well understood and where dinosaurs were just starting to become the dominant land animals. While much smaller than the biggest carnivores like the tyrannosaurs and carnosaurs, Dilophosaurus would have been a pretty nasty threat to a human if such an encounter were possible.

It’s taken some time to figure out exactly where Dilophosaurus fits into the theropod evolutionary tree. Some authors have argued that it was one of the more basal coelophysoids, a group of small but common predatory dinosaurs back in the late Triassic. Others have put it closer to the more advanced ‘stiff-tailed’ theropods, the tetanurans. Adding some confusion to this, there’s a few other crested theropods out there, such as Sinosaurus of China which was once thought to be the same or at least closely related to Dilophosaurus (Hu, 1993). The head ornaments of Sinosaurus, though, seem to have evolved independently, and it’s now classified as a primitive tetanuran (Hendrichx et al., 2015). There’s also a Monolophosaurus (‘single-crested reptile’) and a Cryolophosaurus (‘frozen crested reptile’), but neither look terribly much like Dilophosaurus, nor are they closely related to it. Cryolophosaurus is noteworthy, though, as it’s one of only a handful of dinosaurs known so far from Antarctica. Dinosaurs really made it that far. Currently, Dilophosaurus and its relatives seem to fall between the slim, skinny coelophysids and the horned ceratosaurs (Hendrickx et al., 2015). This is interesting, as it shows that weird head ornaments like the crests of Dilophosaurus started showing up fairly early in theropods, a group that would only get stranger and stranger from here. Speaking of the crests of Dilophosarus, their use has been another source of disagreement amongst paleontologists for generations. While several suggestions have been tossed around through the years, such as thermoregulations and species recognition, most scientists tend to agree that the crests of Dilophosaurus were display features used by this dinosaur to attract a mate (Knell & Sampson, 2011). A rough rule of thumb in paleontology- if a fossil animal has some big, weird anatomical feature with no other obvious use, its often safe to say it’s a display feature until further notice. It seems that, what with the spikes, frills, horns, feathers, and crests present throughout so many dinosaur lineages, these animals weren’t afraid of showing off. The Mesozoic world must have been teemed with the raucous, primordial displays of these animals.

We actually know a fair bit about the life of Dilophosaurus thanks to some pretty unique finds from the American southwest. Three individuals were found in a fairly close proximity to each other when this dinosaur was first discovered in the 1940’s (Welles, 1984). As ever with groups of predatory dinosaur fossils, it’s hard to prove if this little assemblage represents individual animals that lived separately and were drawn to the same place and died, if they had died in separate spots and had been transported by water to one area, or if they had been social animals living together when they died. Samuel Welles reported a series of dinosaur trackways from Arizona which he attributed to Dilophosaurus (Welles, 1971). These trackways seemed to have been left by more than one animal, which Welles thought was good support for the idea that Dilophosaurus travelled in groups.

Further trackways from Utah, laid down on what was back then a sandy beach, were left by a medium-sized theropod which seemed to have been walking along before suddenly lowered its body into a sort of crouch on a gentle slope with the longbones of the feet, most of the tail, and point of the ischium bone contacting the ground (Milner et al., 2009). It looks like the dinosaur also rested the edges of its hands on the ground when it stopped. For some reason it then apparently picked up its hands and shuffled forward nearly a foot before resting again. At some point, the dinosaur then stood up and walked away through the sand, leaving occasional drag marks from the tip of its tail as it went. The authors noted that, while Dilophosaurus was the right size and in the right location to have been this mysterious track-maker, the footprints are slightly older than rock units that Dilophosaurus is known from. So the trackmaker might be, geologically, the oldest Dilophosaurus yet known, or something similar. We may never know for sure. As to why the dinosaur who left these tracks did what it did, we don’t know either. Traces of behavior like these make dinosaur fans wish all the more that we could go back and see these animals when they lived. 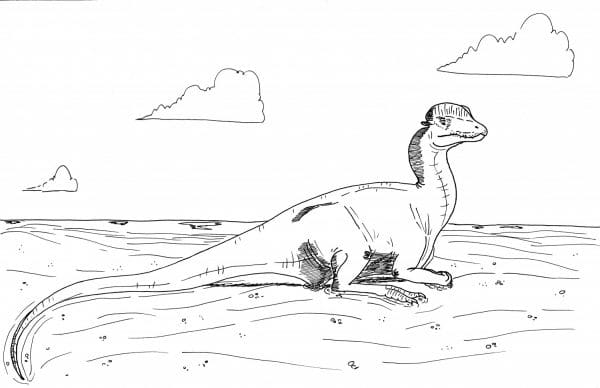 An image of the Utah trackmaker as an early Dilophosaurus. We aren’t sure what it was doing at the site where it left it’s tracks, but maybe it was just trying to bask in the sun… By Nicholas Carter

Like all the other movie star dinosaurs, Dilophosaurus was, first and foremost, once a real animal. It moved, breathed, and had its own set of behaviours. So while it’s great that pop culture brought this once-obscure dinosaur to people’s minds, the real Dilophosaurus is just as worthy of our attention.